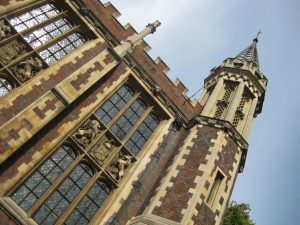 From 1861 until 1947, thousands of South Asian law students came to London to become barristers at the Inns of Court. The experience gave them special court privileges and heightened status upon their return home. It also gave them a new understanding of what it meant to be imperial subjects, on the one hand, and to be Indian, Ceylonese or Burmese, on the other. Many of the leaders of the independence movement in British India were London-trained barristers, including Mohandas K. Gandhi, Jawaharlal Nehru, and Mohammad Ali Jinnah. (I’ve written on these themes here and here.)

The Inns of Court kept Registers of Admission, in which new students’ demographic information was recorded. They also kept registers listing students who were “Called to the Bar” at the end of their course of study and dining at the Inns. While most of these registers are published, they are hard to find outside of Britain.  Exceptions are the remarkable Inner Temple Admissions Database and R. F. Scott manuscript listing Indians (and others) at the Inns, 1859-1927.

My research assistants and I compiled the register entries of South Asian students at three of the four Inns. I will be using these materials for a larger article project on Inn students from across the British Empire.

Here are the PDF lists:

A Note on Coverage:

A Note on Spelling: The transliterations of South Asian names into Latin script often led to inconsistent and non-standard spellings. You may have to search multiple spellings of the same name to find a particular individual. Obvious errors in spelling are indicated by a [sic], sometimes with the correct spelling added in brackets for the purpose of keyword searching.

I thank Frances Bellis of Lincoln’s Inn Library in London for making these registers available to me; Renu Paul and Bennett Cross, for their dedication to this project; and the Graduate School of the University of Wisconsin-Madison for its funding support.