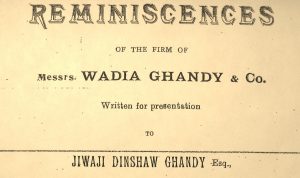 Overview: This list gives us a sense of what books lawyers and judges would have been using in the early twentieth century in British India. It identifies the leading legal treatises in all areas of colonial Indian law, and particularly in Bombay Presidency. I have added headings where books are clustered thematically, but the organizational principle of the list is not always clear or consistent.

Acknowledgments: Wadia Ghandy and Co. continues to operate as a solicitors’ firm today in Mumbai. I am grateful to the firm for allowing me to consult its copy of Mistry’s Reminiscences, which is a published source.

[Other bodies of law]