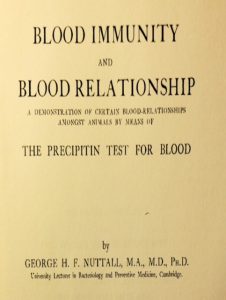 Like most academics, I enjoy reading the Acknowledgments in scholarly books. They sometimes mention blood in the “blood, sweat and tears” tradition. The most memorable Acknowledgments I’ve seen, though, are about actual blood. As in: the author is thanking all of the people who sent blood samples from around the world. Mostly animal blood, as it turns out.

George H. F. Nuttall (1862-1937) was an American-British researcher at Cambridge who did research on a serological test that would be used on forensic blood stains. The precipitin test identified the species of origin of a blood stain. To do it, you needed a reference library of blood serum from animals of many different species.

Nuttall conducted 16,000 experiments using 900 blood samples from 586 animals around the world. In the Acknowledgments to his 1904 book, Blood Immunity and Blood Relationship, he “very cordially” thanked the “seventy gentlemen” who helped him amass a Noah’s Ark of animal blood. These included some sources close to home, like the Prosector of the London Zoo (in charge of dissections) and “Messrs Brazenor Brothers, Naturalists at Brighton.” From further afield, Nuttall thanked:

Nuttall thanked a disproportionate number of contacts based in South Asia, particularly military physicians in the Indian Medical Service. He acknowledged samples sent from Bombay, Calcutta, Kashmir, Chitral, Khandesh, South Sylhet, and Ceylon, among others. He didn’t name the animal species covered, probably because they were so numerous.

There was also some research on human blood and race science going on here; this was the age of eugenics (more on that here and here). Nuttall thanked:

This race-based line of research, like blood group testing on humans by race, ended up nowhere conclusive. The precipitin test did prove effective in distinguishing between species, though. It took special hold in British India, where its forensic applications occupied much of the Imperial Serologist’s time. Stay tuned for my forthcoming article on precipitin testing and the Imperial Serologist in a volume edited by Ian Burney and Chris Hamlin (a product of this conference).